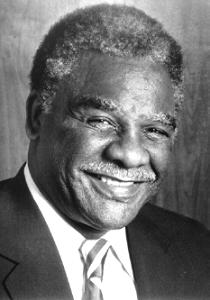 FRIEND OF THE COMMUNITY | Inducted 2007 [Posthumous]

Harold Washington (1922–1987), as mayor of Chicago, promoted and facilitated LGBT political participation and empowerment, which laid groundwork for passage of the City’s 1988 Human Rights Ordinance. He appointed the first mayoral liaison to the LGBT community; was the first Chicago mayor to address a gay rights rally; and established the City’s first official Committee on Gay and Lesbian Issues (forerunner of today’s Advisory Council on Lesbian, Gay, Bisexual and Transgender Issues) with an openly lesbian staff director.

Washington was born in Chicago on April 15, 1922. After four years of military service, he earned a bachelor’s degree from Roosevelt University in 1949 and a law degree from Northwestern University School of Law in 1952. After a period of private practice and service in city and state legal jobs, he served in the Illinois House of Representatives from 1965 to 1976 and in the Illinois Senate from 1977 to 1980. He then served in the U.S. House of Representatives from 1981 to 1983.

Prior to his election as the city’s first African American mayor, Washington made significant contributions to the cause of LGBT equality in the political arena. He advocated the inclusion of equal rights for gay and lesbian persons in the Illinois Democratic Party’s platform. While serving in the Illinois General Assembly and in the U.S. House of Representatives, he co-sponsored gay and lesbian rights legislation—which has yet to be enacted at the federal level. He also was a principal sponsor of the Illinois Human Rights Act, which passed in 1980 though backers were unsuccessful in including protection for sexual orientation. On equal rights issues, he was truly a man ahead of his time.

After taking office as mayor, Washington headlined a Lincoln Park rally in July 1984 that called for reintroduction of a sexual-orientation nondiscrimination ordinance that activists and supportive City Council members had been trying since 1973 to enact. This rally jump-started a renewed campaign by LGBT activists to get the ordinance passed. To highlight this effort, Washington spoke at the annual rally following the Pride Parade in every subsequent year that he served in office. The ordinance, unofficially but widely known as the Human Rights Ordinance, was finally enacted in 1988 and stands as a testament to Washington’s vision of equal rights for all Chicagoans.

Also in 1984, Washington issued a directive for all city department heads to take part in a community meeting with a broad-based representation of Chicago’s gay and lesbian organizations and businesses from all parts of the city. The following year, Washington established the city’s first official Committee on Gay and Lesbian Issues. This body would become today’s Chicago Commission on Human Relations’ Advisory Council on Lesbian, Gay, Bisexual and Transgender Issues, which oversees the Chicago Gay and Lesbian Hall of Fame. As mayor, Washington also appointed the first openly gay or lesbian full-time coordinator of LGBT issues in Chicago’s history.

Harold Washington died of a heart attack in his office on November 25, 1987. As he did for other segments of the city, he forwarded ideas of community empowerment, direct participation, fairness in service distribution, and civil rights legislation to guarantee equality for all. Photo courtesy of Chicago Public Library, Special Collections & Preservation Division. Official photo by Antonio B. Dickey.