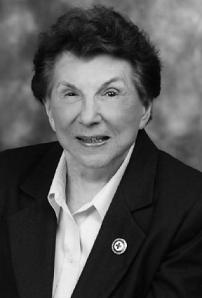 For 17 years from 1990 to 2007, Marilyn Urso, R.N., served as the Research Registered Nurse at Howard Brown Health Center, or HBHC, which hosts the Multi-Site AIDS Cohort Study under the auspices of the National Institutes of Health, the world’s largest epidemiological study on sexual practices and how they relate to the transmission of HIV. She furnished warm, welcoming support to the participants and other important services on- and off-site, becoming what some clients called their “second mother.”

Urso recalled that, while being interviewed for the position, she was asked if she felt comfortable visiting the homes of gay men. A bit put off by the question, she replied that she had been very comfortable with gay men long before it was considered “fashionable.”

From 1990 on, Urso was a warm, welcoming, and supportive presence for those participating in the MACS (the largest epidemiological study in the world on sexual practices and how they relate to HIV transmission). At a time when gay men in Chicago were increasingly being diagnosed with HIV/AIDS and succumbing to disease, she treated everyone with dignity and respect. Urso led clients through extensive medical testing, regularly completing in-home assessments for those who were not well enough to visit the clinic. She held hands, wrote notes of thanks, and made volunteers feel important for their contributions to AIDS research.

Outside her MACS work, she performed STD testing, screening, and health assessments along with administering flu shots off-site. She made appropriate referrals when necessary, working evenings and weekends when needed. She became an important figure in the lives of many vulnerable individuals, and her nurturing presence helped to establish HBHC as a welcoming and safe place for LGBT people at the height of the AIDS epidemic.

Urso reflected upon a time she visited a patient in the hospital. “I saw a full tray of food sitting outside his door and brought it in to him. The hospital staff was afraid to bring the tray into his room,” she recounted angrily, remembering how this led her to realize just how much education about HIV/AIDS was needed. As a health advocate, her contributions to the important MACS work have resulted in the successful retention of participants, many for the unprecedented span of more than 25 years.

Urso’s unprecedented commitment to her job and to the clients of HBHC and the study participants have set her apart. Her smiling face, hopeful and encouraging attitude in a time of crisis, and crucial knowledge about HIV and its treatment, combined with bedrock sincerity, have symbolized hope, help, care, and respect to many men and their families facing difficult situations or end-of-life decisions. Fortunately, she has witnessed major strides in HIV/AIDS treatment and has seen that those living with HIV today can expect longer, healthier lives—in part, thanks to her dedication and efforts as a great and good friend to Chicago’s LGBT communities. She died Jan. 10, 2012 after a short battle with lung cancer.