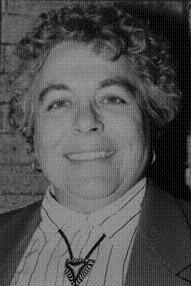 A native New Yorker, who began her activism in New York shortly after the Stonewall Revolution, Joanne E. Trapani was an early member of NYC’s Gay Activist Alliance. She became a member of the Board of Directors of the Mattachine Society, was a founding member of Lesbian Feminist Liberation, and a member of the Manhattan Women’s Political Caucus. Through this involvement, she gained hands-on experience in political lobbying, advocating on behalf of sodomy repeal [the New York State General Assembly] and the local Human Rights Ordinance [New York City Council].

After a decade of New York City political activism, she relocated to Illinois in 1976 and became a welcome presence in the Chicago-area gay and lesbian community. She co-chaired the Illinois Gay and Lesbian Task Force for several terms and served as liaison to state and local governments and agencies. In 1997 she became a member of the Oak Park village board as the first open lesbian elected to office in Illinois, and in 2001 Oak Park voters elected her as village board president.

Trapani has been honored by the Gay Chicago Magazine Awards [Woman of the Year], and she has been the recipient of the John Michie Award, presented by Dignity-Chicago, and the Alongi Award for Political Activism, presented by IMPACT. (Please note: this information has not been updated since the time of the member’s induction).