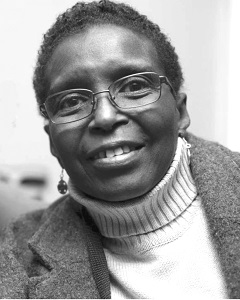 Barbara Smith (1946–2015) was a founding board member of Affinity Community Services. Her leadership, managing Affinity’s finances for 12 of it’s 20 years, founding its Forty Plus and Trailblazers groups, and for her advocacy role in the mentorship and support of black lesbians throughout the broader community was invaluable. Barbara “Robbie” Smith was known for her perseverance, strength, compassion, and integrity. Her passion for engagement with the world lasted throughout her life, and her activism within Chicago’s LGBT communities dated from the 1960s.

Smith was a graduate of Chicago State University. She worked in real estate and as an accountant for over forty years. A founding board member at Affinity Community Services, she established sound financial management practices at the organization from the very beginning. Thanks in large part to her efforts, after twenty years, Affinity has a reputation for exemplary stewardship of donor investments and financial management. Smith also shared her accounting skills with other small nonprofits in Chicago.

Smith was also a founding member of the Forty Plus and Affinity Trailblazers groups, which are peer-led groups serving older Black queer women. In addition to providing support to their members, these groups also host programming for broader audiences highlighting health and economic disparities for queer women of color and providing advocacy opportunities for that population. Her contributions to the founding and shaping of these groups have helped to make Affinity a national model for service to Black LGBT community.

Smith served as the newsletter editor and as an organizer in Women of All Cultures Together (WACT), which was created as a social networking space for women who did not want to participate in the bar scene. The WACT monthly brunch is today a twenty-one-year old institution that continues to contribute to the rich fabric of Chicago’s LGBT life. In addition, she supported the Lesbian Community Care Project, Crossroads Fund, and the Chicago Foundation for Women. She attended the fiftieth anniversary of the March on Washington in August 2013, and the March on Springfield for Marriage Equality in October 2013, where she lobbied state officials. She also participated in countless parades for LGBT equality, including the Bud Billiken and Chicago Pride Parades.

Before her passing in February 2015, Smith was increasingly interested in state and national politics. In 2012, she traveled to Wisconsin to campaign for President Barack Obama and Senator Tammy Baldwin.

In a 2007 interview with the Chicago Gay History Project, when asked about the defining moments in her life, Smith replied, “There have been several in my life at this point, the first being the realization that my daughter was a born leader. Another would be that my involvement with Affinity has been a gift that I have been given. … I think my personal legacy to the community would be a testament about the rewards that come from being a service to others.”