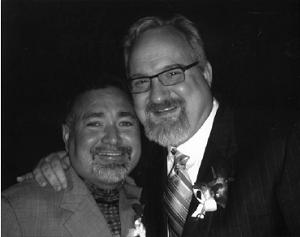 Jesus Salgueiro, and Art Smith, artist and celebrity chef respectively, as an openly gay couple, created Common Threads, an international children’s charity that fosters a familial environment where children learn to value each other and discover universal understanding and mutual acceptance.

In 2006, for their charitable efforts, Salgueiro and Smith became the first openly gay couple to be recognized by Chicago magazine with its “Chicagoans of the Year” award. “Without Jesus,” Smith says, “my life is incomplete, and without him Common Threads would not exist.” The organization was founded in 2001 in the wake of a visit the couple made to New York City shortly after 9/11. It was a mission of healing; Smith, then probably best known as Oprah Winfrey’s personal chef, had been asked to cook dinner for a mother and her three school-age children. “The father had disappeared in the rubble, making a delivery to Tower 2,” Smith recalled. “It was as if time had stopped for this family.” After returning to Chicago, Salgueiro returned to his studio to paint, while Smith began writing. “Our world is a quilt,” he wrote, “its people the fabric, all joined by common threads.” Thus the charity had its genesis. Today, it operates out of an office at Kendall College in Chicago. The nonprofit teaches children aged 8 to 12 valuable lessons about nutrition, food preparation, and other countries’ customs and traditions.

Throughout his career, Smith has participated in and contributed to many fundraisers for charitable organizations, within and outside LGBT communities, including the successful Gender PAC–sponsored celebrity cook-off benefiting the Center on Halsted. Smith was also instrumental in arranging the donation of the Center’s kitchen facility. Salgueiro creates dazzling renderings of manhole covers from cities around the world; he sees his art as “an expression of love.” The two travel together to teach cooking and art to children around the world, sharing their love and their talents in places as diverse as South Africa, Croatia, and Los Angeles. (Note: information listed has not been updated since the members’ induction).