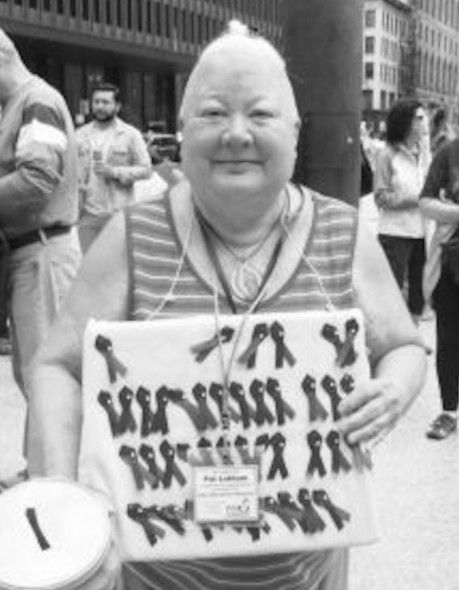 Friend of the Community | Inducted 2022 [Posthumous]

For nearly 30 years, Patricia Ann” Patty the Pin Lady” Latham surfed the wave of busy bar crowds up and down Halsted and Clark Streets, taking the bus from bar to bar, first selling ribbons, buttons and candy, and later blinky things, pins and more ribbons, to raise funds for those she felt most in need in the community– most of her funds generated going to assist the missions of Open Hand and later Vital Bridges.

Known to most that frequented the northside bars, somewhat notorious, and always friendly, she was on a quiet mission. Not that anything about Patty was quiet. She was a force of nature and stood up to all challengers, by all accounts incredibly clever in overcoming obstacles and soliciting help to meet her fundraising goals from LGBT people and organizations.

Born May 9, 1943, Patty undertook this evening-to-late night, dangerous work, at around fifty years old, and kept going well into her seventies, and throughout a more than ten-year fight with cancer. In 2017, Windy City Times gave an intimate look into Patty’s life and dedication to her work, which she considered an essential part of modern life — doing good in her community. Patty was not perfect, but she was fantastically effective at what she did, spending countless thousands of hours walking around, talking to people, and soliciting donations just a dollar or two at a time.

In the Windy City Times article, Patty is quoted as joking that she had collected “MILLIONS!” of dollars from the community. When asked to prepare this biography, Lori Cannon estimated that Patty donated more than $80,000 over her years of work. Over so many years, so many nights, so many baubles — it is easy to imagine that she raised much more.