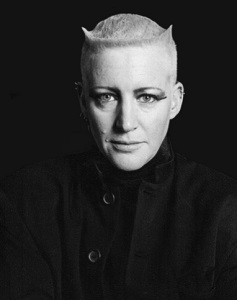 The bar personality known as Paté, a native and lifelong resident of the Chicago area, has been an active member of Chicago’s LGBT community since she began working at the Swan Club and The Closet in 1986. Her loyal customer base and her volunteer work for LGBT and AIDS organizations have brought her acclaim, but she has regarded nothing as more meaningful than her years of animal-rescue commitment, devoting countless hours to organizations rescuing and re-homing lost, neglected, and discarded pet animals, both locally and after Hurricane Katrina.

Other venues where she has tended bar include Club 950, Berlin, Spin, the Holiday Club, Cocktail, and Parlour on Clark. During her career, she has won mixology awards from major brands in the liquor industry, including Bacardi and Stolichnaya.

Paté has also volunteered for organizations that have included Chicago House, Ride for AIDS Chicago, and the Lesbian Community Cancer Project. She has organized or tended bar for fundraisers benefiting such groups as the American Society for the Prevention of Cruelty to Animals, The Humane Society of the United States, Guide Dogs for the Blind, the American Cancer Society, and organizations promoting children’s welfare, leukemia research, and breast cancer awareness.

She has worked with Chicago Canine Rescue as a volunteer and manager of adoption events from 2003 to 2008, and since 2011 she has been a volunteer and development board member for Found Chicago. The latter group aids the city’s most medically and behaviorally challenged dogs; they would be euthanized if not for the group’s mission to “rescue, rehabilitate, re-home.” Between 2008 and 2011, while mourning the deaths of her immediate family and fighting her own battle with cancer, she managed to volunteer for New Leash on Life and for One Tail at a Time.

Paté regards her primary activism as involving her dedication to helping neglected, abused, and unwanted dogs find loving new homes. (Note: information listed has not been updated since the member’s induction).