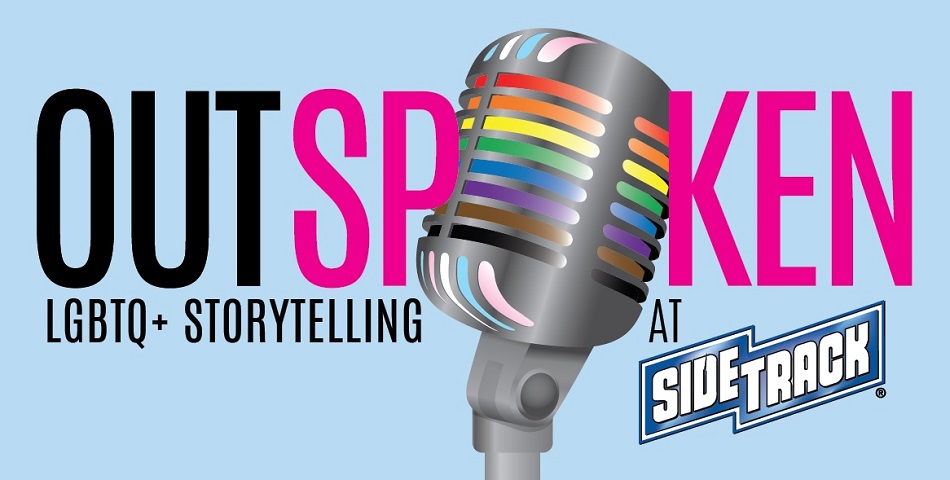 Outspoken is a monthly LGBT storytelling show co-founded by David Fink and Arthur Johnston in 2014. The shows provide a platform for people throughout the spectrum of the LGBT umbrella. The show is curated for inclusion. There are stories by people of different ethnicities, ages, proclivities, geographic backgrounds, physical abilities, and gender identities. The storytellers may look different from each other and audience members, but they all share the same emotional journeys. Outspoken elucidates the human experience. Every month, in that room at Sidetrack, they create community.

The environment of the performances creates a safe, accepting, and nurturing environment for people to talk, absorb, and personally relate to stories of LGBT life. The audiences tend to reflect the diversity of the storytellers. There may be no other show in Chicago that has an audience that is as inclusive as the ones at Outspoken. Sidetrack is not only a bar but a community gathering spot. It has a history of activism. Outspoken talks about LGBT people and events from the past. The hosts always talk about information that connects to the month of the show. Some people in the audience call it their gay history lesson.

David Fink served as curator for the first four years of the show. Since that time, he has served as the show’s creative director, Brad Balof is manager/writer, and Archie Jamjum has taken over the role of curator. Arthur Johnston and co-host Kim L. Hunt hosted the monthly event at Sidetrack, with Anna DeShawn taking over co-hosting duties from Hunt in 2022. Traditionally, Outspoken is held on the first Tuesday of the month. The format is typically inclusive of six storytellers with one intermission. Along with the monthly program, Outspoken has brought LGBT storytelling programs to libraries, storytelling festivals, and museums. Outspoken has partnered with other storytelling shows. They have also provided programming for suburban pride gatherings.

Chicago has a strong storytelling history and having a show specific to LGBT tellers and allies enriches the diversity of the Chicagoland storytelling community. Most of the stories are archived through audio recordings. Many can be heard on the Outspoken podcast. Some are available through the storytellers who posted them personally. The program has been a topic for programming on WBEZ, WGN, and various podcasts. In 2015, the show was given a slot at The National Conference for LGBT Equality: Creating Change, the annual conference hosted by The National LGBT Task Force.