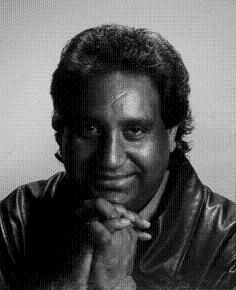 Born in Pakistan, Ifti Nasim wrote “Narman”, an award winning book of Urdu poetry – said to be the first direct statement of “gay” longings and desires to ever appear in that language. Its courageous publication met with revilement but critical acclaim and inspired other Pakistan poets. “Narman” has also been distributed in England, Norway, Sweden, and Germany. In December 2000, he published “Myrmecophile”. He co-founded Sangat/Chicago and has been president of the South Asian Performing Arts Council of America.

The manner in which Nasim’s verse was published in Pakistan underscores its controversial nature: Because Nasim’s publisher knew that there might be “trouble” having the manuscript typeset, the publisher stood over the printer’s shoulder as the text was entered into the computer. The real nature of the manuscript was not evident to the printer until the books were printed. When the printer realized that the books dealt with gay-related themes, he screamed: “Take these unholy and dirty books away from me, or I’ll set them on fire!” Because of the controversy, the work is being sold underground. It has generated a surreptitious market.

Publication of “Narman” produced some positive change in Pakistan. Because of the poetry’s honesty, Nasim said that a group of young truth-loving poets has begun to refer to other “honest” poetry as “narmani” poetry. Obviously, “Narman” educated Pakistanis. A prominent Pakistani in his 60s with many children told Nasim that he broke down and cried when he read “Narman”, apparently because he did not know about homosexuality. This man has become an ardent sympathizer with gay rights.

Ifti Nasim’s “Narman” raises issues related to Islam’s tolerance for homosexuals. Nasim, who believeds he had a close and personal relationship to his God, believed God “wouldn’t have created me if he didn’t want me to lead a happy and fulfilled life. God doesn’t create trash.” In 1993, he became the first Third World poet to read at the Harold Washington Library Center in Chicago. For his poetic work, he received the Rabindranath Tagore Award from Chicago’s South Asian Family Services in 1994.

Nasim’s contribution to Chicago’s gay and lesbian community was not only confined to his courage as an international ambassador of tolerance. As co-founder of Sangat/Chicago, he also displayed a leadership role in the city by launching an organization to provide education and support for gay and lesbian South Asians.

Nasim served as president of the South Asian Performing Arts Council of America and was also a top salesman at Loeber Motors, his employer for 12 of the 22 years he lived in Chicago. Ifti Nasim’s model of courage enriched our entire community. He died July 22, 2011 at the age of 64 following a sudden illness.