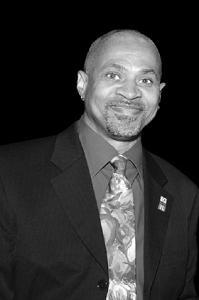 Beginning as an out and proud gay sailor in 1974, Joey McDonald, spent six years on active duty helping to break down his fellow crew members’ stereotypical attitudes toward gay men. While on active-duty leave in Chicago in 1979, McDonald volunteered as a greeter at the first International Mr. Leather (IML) contest. What started as a serendipitous moment would lead to volunteer work that has consumed a large part of his life. His strong commitment to improving the quality of life for members of Chicago’s LGBT communities, particularly his work with people living with HIV/AIDS, his leadership in the recovery community, his mentorship in the leather community, and his advocacy for LGBT equality is remarkable.

After his honorable discharge in 1980, McDonald began volunteering in Chicago’s LGBT communities in earnest: He spent many an evening at bars and social events, distributing fliers and talking to gay men about the hepatitis vaccine. As the AIDS crisis exploded, McDonald began cooking and delivering food to those in need. In 1985, he co-produced “BLOW-OUT,” an all-day entertainment extravaganza, working with the late Hall of Fame member Thom Dombkowski to present the first benefit for what would become Chicago House.

From 1985 to 1992, McDonald volunteered with the NAMES Project in Chicago, assisting families and friends of people who had died of AIDS-related complications. He also did community outreach with STOP AIDS/Chicago from 1993 to 1995, passing out safe-sex kits.

Since 1991, he has been active in Chicago’s LGBT recovery community, serving on the planning committee for Chicago’s annual 12-Step Recovery Roundup from 1992 to 1995. In 1993 he became the first president of Sober, Safe, Sane and Consensual Club Chicago (SC3), a substance-free space for leather folk that he had helped to found with four friends. He was an IML staff volunteer for more than 10 years and became a departmental supervisor in 1993. Since 2001 he has been an active member of IML’s Executive Planning Committee and presently serves as the Den Daddy for IML contestants. In 2003 and 2004, he served as volunteer coordinator for Equality Illinois’s annual Justice for All gala. He now works as operations manager for that organization.

McDonald continues to be a mentor to others in the leather community and received the Pantheon of Leather Lifetime Achievement Award in May 2009. In his acceptance speech, he said that he had always merely done as he was told to do when he was young: “Give back to your community.” He remains visible and active in Chicago’s recovery community and, when time permits, is always ready to volunteer where there is a need. (Note: information listed has not been updated since the member’s induction).