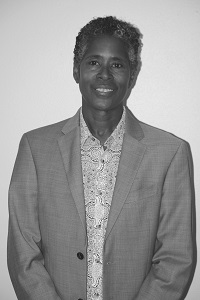 Dr. Phoenix Matthews is widely recognized, nationally and internationally, for groundbreaking research on health disparities in underserved populations. Born in Zanesville, Ohio, in 1966 and residing in Chicago since 1995, Matthews is an Associate Professor at the University of Illinois–Chicago and clinical psychologist with more than twenty years of experience in examining determinants of cancer health disparities, focusing on African-American and LGBT populations. Matthews’s recent research focuses on the development and evaluation of community-based and culturally targeted smoking cessation interventions, most notably in conjunction with the acclaimed “Bitch to Quit” program at Howard Brown Health Center, which is the only LGBTQ smoking cessation program in Chicago.

Throughout an impressive career and LGBT community leadership, Dr. Matthews has contributed to the advancement of research associated with cancer prevention and control among vulnerable populations by developing culturally competent outreach, treatment, and retention methods that have substantially improved the successful recruitment of members of minority groups into research trials. These approaches have contributed to the enrollment of the highest percentage of African-American and LGBT smokers in any smoking cessation study, a commitment evidenced by Matthews’s long-standing leadership experience within Chicago’s LGBT community. These include: membership on the Psychosocial Advisory Committee of the Y-Me Breast Cancer Foundation; membership on the Women’s Research Committee of Howard Brown Health Center; membership on the Board of Affinity Community Services, where they were instrumental in receiving funding to pilot a groundbreaking Take Charge Health Promotion Study; membership on the Advisory Committee for Gay and Lesbian Concerns for the Chicago Board of Health; as well as, at present, membership on the Health Advisory Council for the Chicago Department of Public Health.

Dr. Matthews is the recipient of numerous awards and recognitions, ranging from the Gay and Lesbian Health Professional Association’s “Health Professionals Advancing LGBT Equality Achievement Award” in 2014 to induction into the Zanesville, Ohio, City High School Hall of Fame and the “Healthy Chicago Award” from the city’s Department of Public Health in that same year. For three years (2013–2016) Matthews was recognized as a Helen K. Grace Diversity Scholar by the College of Nursing at the University of Illinois–Chicago and in 2012 received the Research Mentor of the Year Award from the Hispanic Center for Excellence in Medicine at the University of Illinois–Chicago.

Widely recognized as a champion of community-based research informing the health prevention, intervention, and promotion campaigns within Chicago’s LGBT community in general and, specifically, members of the African-American and Latino communities, Dr. Matthews has made a notable mark on LGBT health in the city; members of these populations are all the better for it. (Note: information listed has not been updated since the member’s induction).