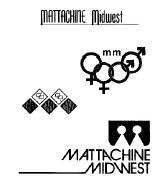 From 1965 – 1986, Mattachine Midwest carved a permanent place for itself in Chicago history as the city’s first enduring gay rights organization. Formed in a period of repression, it pursued a course of political activity, education, and social service that blazed paths for successor organizations. Many of its members have already died, but their contributions remain.

Chicago’s first successful gay rights organization, it was founded in 1965 by the late Robert Sloane Basker, Pearl M Hart, Ira H. Jones, Bruce C. Scott, and Valerie Taylor (all Hall of Fame inductees). Jim Bradford and Hall of Fame inductees William B. Kelley and Marie J. Kuda were among its earliest members. It was formed at a time when gay men and lesbians experienced discrimination on all fronts and were subject to harassment, job loss, and arrest.

The founding of Mattachine Midwest, an independent organization, followed the premature demises of at least two previous Chicago chapters of the national Mattachine Society in the late 1950’s and early 1960’s (as well as the quick death decades previously of the nation’s first gay rights organization, Chicago’s Society for Human Rights, formed in 1924 and suppressed in 1925). The organizers of Mattachine Midwest were determined not to let the fear, threat, or fact of exposure, which had helped to doom earlier efforts, have the same effect on their group. And, though it was a challenge at times to keep the organization going, it did survive for 21 years.

Mattachine Midwest’s initial focus was both political and service-oriented. On the political front, Mattachine Midwest met with police officials, including at least one superintendent, on several occasions to discuss issues of entrapment and bar raids. Its members also polled political candidates, advised young men who were facing the draft, and maintained a dialogue with other similar groups around the country. Beginning in 1966, Mattachine Midwest delegates helped to convene the first national gatherings of gay and lesbian organizations, then numbering nor more than a few dozen.

Mattachine Midwest also produced a monthly newsletter, distributed free through gay bars as well as to members by mail, which in the early years provided many persons with their only source of gay community news. The Mattachine Midwest referral hotline was another first for the city, providing a telephone number that gay men and lesbians could call to find legal, medical, counseling, employment or religious help.

As other organizations burst onto the scene with the advent of the Gay Liberation movement at the end of the 1960’s, Mattachine Midwest began to focus more on social service than on political matters. Besides continuing the hotline, which lasted for 18 years, MM sponsored a support group for gay alcoholics, offered weekly discussion group, and began a support group for parents and friends of gay persons. Later, after the arrival in this country of gay Cuban exiles by way of the Mariel boat-lift in 1980, some Mattachine Midwest members aided in sponsoring them.

Mattachine Midwest disbanded in 1986, shortly after celebrating its 20th anniversary and suffering the death of its last president, Ira Jones. A victim of the times, it could not attract enough new members. Though the organization is gone, its contributions remain, and its role was important in Chicago’s gay history.