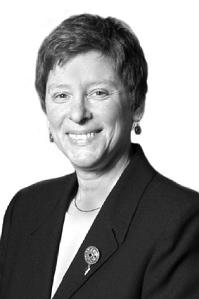 Marcia J. Lipetz, Ph.D., has a long history of leadership, energy, passion, and vision for Chicago’s LGBT community and the institutions affiliated with it, especially her work with the AIDS Foundation of Chicago, the WPWR-TV Channel 50 Foundation, and Center on Halsted.

Her dedication over more than 30 years was exemplified by the opening of the Center on Halsted, where she served as vice chair of the board of directors and serves on the Board Governance Committee. Beyond her leadership role at the center, Lipetz was a key player in developing its vision and then raising funds for its construction and opening in 2007.

As president and CEO of the Executive Service Corps of Chicago, Lipetz has brought the expertise and skills gained from her decades of community-building and nonprofit-sector leadership to benefit the entire spectrum of Chicago’s nonprofit community. Her work at the Executive Service Corps also reflects her years of working with two organizations that have been benefactors of Chicago’s LGBT communities: the AIDS Foundation of Chicago and the WPWR-TV Channel 50 Foundation (now the Alphawood Foundation).

As the AIDS Foundation’s first full-time executive director, she was instrumental in building consensus, securing funding, and developing a community-wide response to the pandemic at a vital stage in that organization’s existence. At the WPWR-TV Channel 50 Foundation, she provided crucial funding for a wide range of LGBT cultural, health, and other community-based organizations, many of which would not have survived otherwise.

She has also chaired the board of directors of the Donors Forum of Chicago, serves on the Illinois attorney general’s Charitable Advisory Council, and served on United Way of Metropolitan Chicago’s board of directors and on the United Way/Crusade of Mercy Chicago Council.

Lipetz was born in Louisville, Kentucky, in 1947. She graduated from Douglass College of Rutgers University and went on to earn a master’s degree in sociology from the Ohio State University and a Ph.D. degree in sociology from Northwestern University. She has taught at the University of Illinois at Chicago, Northwestern University, and Spertus College. She has made her home in greater Chicago for more than 30 years and in Chicago for the past 13 years. (Note: information listed has not been updated since the member’s induction). Marcia succumbed to cancer in 2018.