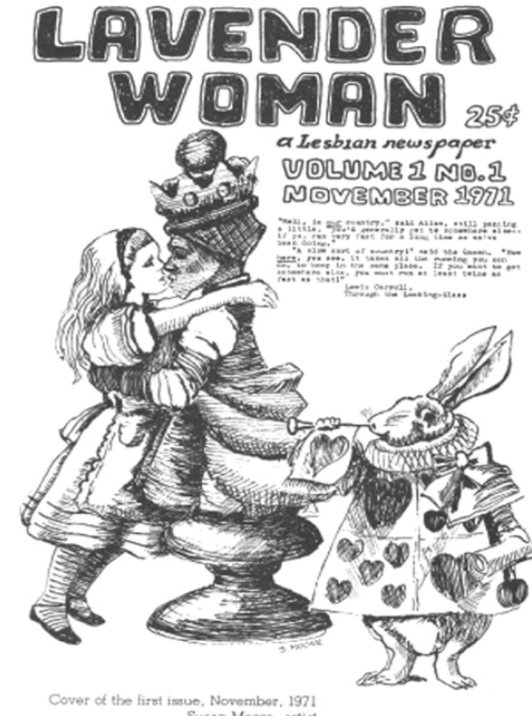 As one of the earliest out lesbian periodicals in the United States, Chicago’s Lavender Woman newspaper was groundbreaking and extraordinary. Lavender Woman published 26 issues between November 1971 and July 1976. It was written, edited, prepared for press, sold, and managed by lesbian volunteers.

The first issues began with only a few hundred copies, which eventually increased to a press run of 2,000 copies that consistently sold out. A few bold lesbians sold the paper on the street in various Chicago neighborhoods, and it was distributed on consignment to the little bookstores and women’s centers that were popping up in the city and around the country. These woman-identified sites were products of the coalescing energy from which Lavender Woman and other groups both generated and grew. The paper also had several hundred paid subscribers locally, in the rural Midwest, and further, making the word “lesbian” loud and visible in places where previously it could only be carefully whispered.

Reflecting many conversations of the era, a prominent theme in the paper was the establishment of “alternatives to the bars” and the development of community resources that could offer more than nighttime socializing in darkened spaces. Through Lavender Woman’s inspiration and impetus, groups and gathering spaces began to form, including Hall of Fame inductee (1993) Mountain Moving Coffeehouse.

Lavender Woman never had an actual office; women met at each other’s apartments. Later, two Chicago lesbians gave a corner of their Uptown apartment to the paper’s production tools, and staff met there regularly. Layout and pasteup (real paste, real scissors) happened on the living room floor, the kitchen table, or any available surface. Any lesbian who showed up was welcome to participate as much or as little as she wished. There were no professional journalists or writers among the several dozen women who participated in the paper – only dedicated community members who found nourishment and encouragement in the work. Poet and activist Vernita Gray, 1992 Hall of Fame inductee, was first published in Lavender Woman.

Lavender Woman empowered its volunteers and gave Chicago’s lesbian community a voice that could never again be silenced.