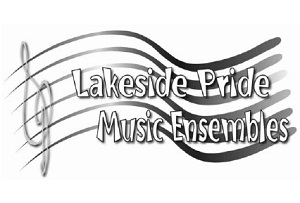 Lakeside Pride Music Ensembles, is the umbrella group for a succession of instrumental ensembles that began in 1979 with the Chicago Gay Pride Band. Today, its four major components are still helping to promote LGBT equality and social acceptance through music, frequently appearing in parades and concerts.

Lakeside Pride Music Ensembles reflects a legacy of Chicago LGBT musical groups that spans more than 30 years. Though the organization has had several names, starting with the Chicago Gay Pride Band in 1979, its mission to bring friends and members of the LGBT communities together through the celebration of music has remained constant.

The marching band entertains nearly a million spectators annually at the Chicago Disability Pride Parade, the Chicago Memorial Day Parade, and the Chicago Pride Parade, among others. Every year thousands of audience members also experience the other three Lakeside Pride ensembles at venues such as the Center on Halsted, the Chicago Cultural Center, the Chicago History Museum, and the Preston Bradley Center.

The original Chicago Gay Pride Band grew out of a desire to have a marching band in the Pride parades and was one of the first gay marching bands in the world. It introduced the Windy City Gay Chorus in 1979 and the Artemis Singers the following year. The organization also hosted the first national conference of LGBT bands in 1982. Out of the seven independent bands that came to the conference, the Lesbian and Gay Bands of America was formed.

The national group later became the Lesbian and Gay Band Association (LGBA). Today, LGBA represents more than 30 musical organizations worldwide. Lakeside Pride members regularly participate and help organize LGBA-sponsored performances, including performances at the Gay Games in Sydney, Chicago, and Cologne. The LGBA also performed at the inauguration of President Obama in 2009 and was the first LGBT organization to march in an inaugural parade.

Acting as ambassadors for Chicago and Illinois, Lakeside Pride members appear at Midwestern events to heighten community acceptance. In addition, Lakeside Pride has helped other LGBT organizations, such as the AIDS Foundation of Chicago, AIDS Walk Chicago, and American Veterans for Equal Rights, to raise awareness of their issues.

From its inception, Lakeside Pride and its legacy ensembles have welcomed members of all playing abilities, from those who have not played since high school to skilled musicians. The organization strives to foster a collaborative and supportive environment that helps all members represent the LGBT communities while expressing themselves through music. (Note: information listed has not been updated since the organization’s induction).