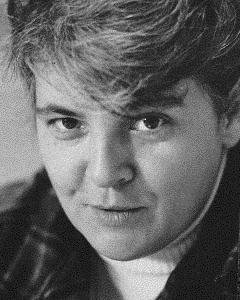 Photo by: Tee A. Corrine

For more than 30 years, she has worked as a historian, archivist, writer, lecturer, and publisher to promote and preserve positive images of lesbians and gay men. She organized five national lesbian writers’ conferences, published the first annotated lesbian bibliography, ‘Women Loving Women’, and is still contributing to literary reference materials and writing columns.

As historian, archivist, writer, lecturer, and publisher, Marie Kuda has sought to preserve and to promote the positive image of lesbians and gay men and their contributions to the wider culture. For over 25 years, she has been arbitrator, communicator and catalyst, promoting exchanges between gay men and lesbians, and between them and the heterosexual community, encouraging dialogue and understanding.

As an activist, in and out of organizations, Kuda has worked continuously to effect those changes which will ensure equality under the law for all, including lesbians and gay men. Her love for and commitment to Chicago are evident in her efforts to archive local history for later study. Since 1978, she has presented hundreds of slide lectures to a variety of audiences. These illuminate the contributions of lesbians and gay men to the mainstream culture, calling to account those institutions which keep such information “hidden from history.”

In addition to organizing five national lesbian writers’ conferences and publishing the first annotated bibliography on lesbian literature Women Loving Women, Kuda has written for almost every gay and lesbian paper in Chicago and she has been reprinted nationally.

As a member of the Gay and Lesbian Task Force of the American Library Association, and in related efforts, she has worked to educate and inform librarians to get “the lies out of libraries” and to make available bibliographies, reviews, and programs which enable the acquisition of books accurately reflecting the spectrum of the gay and lesbian lifestyle.

Kuda’s life goals have been to research and share positive information on lesbians and gay men as historical and creative individuals, and to actively promote gay and lesbian rights by working for social and political equality. Her employment concerns have been secondary; she has worked for Commerce Clearing House and Harcourt Brace, in bookstores and as a bookkeeper, and as a short order cook, a house painter, and a graphic artist. She has been employed by DePaul University Library and Northeastern Illinois University. Kuda currently works at Ravenswood Hospital’s Mental Health Clinic.