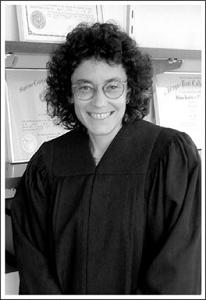 Nancy J. Katz became the first self-identified lesbian judge in Illinois when she was appointed in 1999 as an associate judge of the Cook County Circuit Court. Her community and professional work dates to the 1970s in lesbian feminist, domestic violence, political, legal assistance, and family welfare settings. She is currently assigned to the court’s Domestic Relations Division.

Katz’s work in Chicago’s lesbian and gay communities goes back to her student years in the mid-1970s. In those days, she was on the volunteer staff of the city’s Lesbian Feminist Center and helped to staff the crisis intervention hotline of Women in Crisis Can Act (WICCA). At Northeastern Illinois University, from which she was graduated with high honors in 1977, she was a member of the Women’s Studies Board, the Women Services Board, and the Feminist Club. She was president of the latter from 1975 to 1977.

From then until her 1983 graduation from the Illinois Institute of Technology’s Chicago-Kent College of Law, she was active in the Take Back the Night Coalition, the Greenhouse Shelter for Women, and the Uptown Center Hull House Domestic Violence Task Force, which she co-chaired in 1979.

After law school graduation as second in her class and a law review editor, Katz worked for three years as a staff attorney with the Legal Assistance Foundation of Chicago. Later, she was an ethics lawyer for the American Bar Association’s Center for Professional Responsibility and then returned to the Legal Assistance Foundation, where she became director of the foundation’s social security advocacy project. In 1995, she began four years as assistant general counsel for the Illinois Department of Children and Family Services. She left that post when appointed an associate judge.

Meanwhile, Katz’s volunteerism continued. In 1986, she helped to produce the 17th annual Women and the Law Conference. In 1987, she coordinated lawyer volunteers for Dr. Ron Sable’s 44th Ward aldermanic campaign and became a member of the newly formed Lesbian and Gay Progressive Democratic Organization. She served for two years as a board member of IMPACT, Chicago’s lesbian and gay political action committee, co-chairing the board from 1989 to 1990. Since 1987 she has belonged to the Lesbian and Gay Bar Association of Chicago (LAGBAC), serving for four years on its board. She was a member of the Chicago Commission on Human Relations’ Advisory Council on Gay and Lesbian Issues (ACGLI) from 1990 to 1992. In addition, she was a member of Cook County Hospital’s Women and Children with AIDS Project advisory board from 1989 to 1995, and she has served on Horizons Community Services’ Community Leadership Council since June.

Besides LAGBAC activity, Katz’s other professional involvements have included committee activities in Chicago and Illinois bar associations, the 1998-99 Juvenile Court centennial events committee, the Cook County Circuit Court’s Child Protection Division advisory committee, and the Illinois bar’s Character and Fitness Committee for Cook County. She has made numerous presentations to legal and lay audiences on child welfare law and social security law. (Please note: this information has not been updated since the time of the member’s induction).