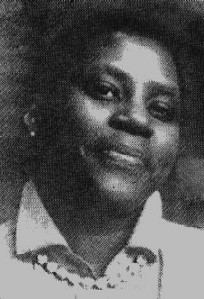 For the past decade, Carol Johnson has been an outspoken advocate for the gay and lesbian community and a personal inspiration to many of its individual members. She has worked tirelessly in the struggle against homophobia, and to increase the visibility and options of lesbian women, particularly women of color, and gay men.

She was the Midwest AIDS Project Coordinator at the Service Employees International Union in Chicago. She presented workshops for lesbians, lobbied for legislation, and worked to institute public health policies favorable to the lesbian and gay community.

Johnson’s personal commitment to eradicating AIDS has been demonstrated professionally through her position as the Service Employees International Union’s Midwest AIDS Project coordinator. This has been further shown through workshops with lesbians on women and HIV and safer sex methods, lobbying for legislative initiatives, and working to institute appropriate public policy. She is active in many capacities, always around gay and lesbian issues. She works within established organizations, she has formed new ones when there is a need, and she challenges homophobia within non gay organizations. These include the Advisory Council on Gay and Lesbian Issues, the Committee to Increase Black Lesbian and Gay Awareness, Within Our Reach, Informed and Connected, United Way of Chicago’s Committee on Discrimination, the National Lesbian Conference steering committee, The Literary Exchange, and the National Coalition of Black Lesbians and Gays.

Johnson is a captain in the United States Army Reserve; she served on active duty at Fort McClellan, Alabama, and as a reservist on active duty in Munich. She is also a certified hypnotherapist and a dance band soloist.