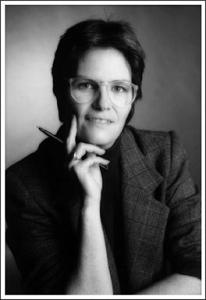 An author and a group organizer, facilitator, and leader, Sarah Lucia Hoagland has been an influential exponent of lesbian feminist values during some 20 years on the faculty of Northeastern Illinois University, where she is a professor of philosophy and women’s studies.

In her capacity as professor, Hoagland makes her lesbian and feminist identity clear to students from the beginning of each class. Such an introduction makes it plain that she will challenge institutional parameters of thought and personal conceptual boundaries. As an instructor, Hoagland has demonstrated an ability to engage students’ minds and to test their preconceptions. Her rigorous standards are accompanied by thought-provoking and probing efforts at encouraging students to reach into unfamiliar, uncharted, and sometimes intimidating areas of conceptualization.

Six years ago, Hoagland and a few other Chicago lesbians organized a gathering that meets monthly to investigate issues of lesbian community and lesbian connection.

Through her extensive writing, Hoagland has frequently explored themes of lesbian focus, lesbian community, and lesbian connection. Her book, “Lesbian Ethics: Toward New Value”, was published in 1988. She wrote in its preface: “I will consider the book successful if it inspires lesbians to get together in something like consciousness-raising groups to discuss the suggestions here. I also wrote this book to express my perceptions about the importance of lesbian focus and lesbian community to our existence as lesbians.”

Hoagland has co-edited two other books— “For Lesbians Only: A Separatist Anthology”, with Julia Penelope, which was published in 1988, and “Feminist Interpretations of Mary Daly”, with Marilyn Frye, which was published this year. Her writing has appeared in such journals as Sinister Wisdom: A Journal for the Lesbian Imagination in the Arts and Politics; Hypatia: A Journal of Feminist Philosophy; and Trivia: A Journal of Ideas.

During travels to cities around the world, Hoagland has reached out to lesbians in order to promote lesbian focus, discussion, and community. In the Chicago area, she has also been an active and frequent organizer and participant in workshops, panels, and community gatherings. (Please note: this information has not been updated since the time of the member’s induction).