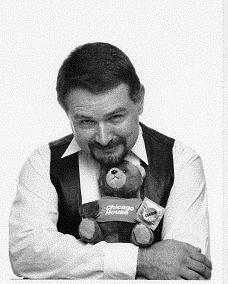 A leader in the development and formation of Chicago House and Social Service Agency, where he also served as principal fund-raiser and eventually as executive director, Thom Dombkowski is a well-known and highly respected member of Chicago’s gay and lesbian community. He was born in Rochester, New York, into a working class Polish-American family.

He received a degree in government and international relations from the University of Notre Dame and a law degree from DePaul University. Deeply affected by death of many friends and a former lover from AIDS, Thom wrote an article on the idea of a hospice in the City of Chicago for people living with AIDS. With impressive speed Chicago House and Social Service Agency was formed. Thom volunteered to take on the task of fundraising. It proved a good fit, as he was well known within Chicago’s gay and lesbian community for his dedication, intelligence, high ethics and leadership qualities.

Eventually, the first of what was to be several Chicago House residences was acquired, renovated, staffed and occupied, with Thom successfully completing a number of highly successful fundraising activities. In its first three months as a incorporated nonprofit organization, Chicago House raised more than $75,000

After serving as a volunteer and member of the board of directors, of Chicago House, Thom was appointed executive director in November, 1986. Thom developed and wrote all Chicago House proposals for funding and developed an individual donor list donor list of more than 7,000 individuals. Thom also continued to initiate and manage a succession of highly successful special events. By 1988, Chicago House had a budget of over $600,000.

In 1990, Thom joined the staff of the Howard Brown Memorial Clinic where he was responsible for researching and developing proposals for corporate, government and foundation funding. During the summer of 1992, Thom left Howard Brown to work for the Assistant Commissioner for AIDS Policy and Program, Chicago Department of Health.

Thom also has been an exemplary community educator. His frequent commentaries, interview and letters in publications have informed people from all walks of life about the realities of AIDS, the nation’s health care needs and the human and emotional issues inherent in being sick, and of finding a healthy, happy and productive identity as a gay person in today’s world.

He also proposed establishment of the Chicago Gay and Lesbian Hall of Fame and brought his idea to fruition during his tenure on the Advisory Council on Gay and Lesbian Issues.

Other activities included being a founding member of IMPACT, and member of the Illinois Gay and Lesbian Task Force, a generous contributor to the Human Rights Campaign Fund. Thom also has been an enthusiastic coordinator, tally master, judge and interpretive writer about the International Mr. Leather Contest.

Thom has received numerous honors for his contributions to the Chicago’s gay and lesbian community. In 1991, he became one of the first three winners of the Stonewall Award presented by the Anderson Prize Foundation established by Chicagoan Paul Anderson. He has also been recognized by Mattachine Midwest, Gay Chicago Magazine, the Gay and Lesbian Caucus of the Independent Voters of Illinois-Indepenent Precinct Organization and the Gay and Lesbian Physicians of Chicago.