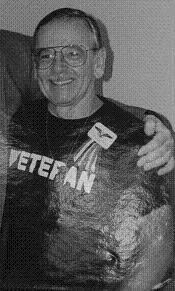 After co-founding the Chicago chapter of Gay, Lesbian, and Bisexual Veterans of America, James “Jim” C. Darby tirelessly promoted the group during a period of intense controversy over equal military service rights. He became recording secretary of the City’s Advisory Council on Veterans Affairs and ultimately national president of GLBVA. He is also an inveterate photo-documentarian of gay and lesbian public events.

After meeting the founder of Gay, Lesbian & Bisexual Veterans of America (GLBVA) at Chicago’s 1991 Gay and Lesbian Pride Parade and discovering that the group had no Chicago chapter yet, Darby put an ad in Windy City Times. One veteran answered. Together they started the chapter.

Finding members was not easy. Many gay men and lesbians had had such bad experiences with the military that they were not interested in a veterans group, gay or not. But by the spring of 1992, half a dozen members were attending monthly. Then, when two well-known gay veterans, Sgt. Perry Watkins and Sgt. James English, were in Chicago for that year’s Memorial Day weekend, Darby enlisted them to help launch the chapter’s first public meeting, and it was firmly established.

On Veterans Day, 1992, GLBVA laid the first pink triangle wreath at annual ceremonies in Daley Center Plaza. At first the group was warmly received and listed in the program, but American Legion sponsors of the event later tried to exclude them. A yearlong campaign finally convinced sponsors that gay veterans belonged at the ceremony—but, rather than list GLBVA with the other 18 groups participating, sponsors simply removed every group’s name from the program.

The year 1993 was a watershed for gay, lesbian, and bisexual veterans. The murder of Allen Schindler prompted Chicago veterans to hold a large memorial service for him. GLBVA participated in national veterans activities, and President Clinton said he would lift the anti-gay ban on military service. Darby flew to Washington five times that year, each time hoping to celebrate lifting of the ban. On July 15, when the “don’t ask, don’t tell, don’t pursue” compromise was announced, Darby joined others in a White House demonstration. Instead of celebrating, all were arrested.

An award-winning, now-retired Chicago public high school teacher of Spanish and other subjects, Darby served in the Navy from 1952 to 1956 as a cryptographer and radioman during the Korean War. In Washington during 1995 Korean War memorial events, Darby and his lifetime partner since 1963, Patrick Bova, took part in all the patriotic activities and became the only openly gay veterans at the culminating parade. When Veterans of Foreign Wars sponsors saw them, their ejection was demanded. To their dismay, Washington police forced them to leave after they refused to move.

Darby eventually asked James Balcer, director of the Chicago Commission on Human Relations’ Advisory Council on Veterans Affairs, to be the council’s representative of gay veterans. For the last two years, Darby has been the council’s recording secretary and has used the experience to connect gay veterans with available services and to forge ties with veterans of other backgrounds.

After serving as president of GLBVA’s Chicago chapter, as regional vice president, and as national executive vice president, Darby was elected national president. In that role, he took part in a May 1997 Pentagon meeting to discuss gay and lesbian veterans issues with Frederick F. Y. Pang, Assistant Secretary of Defense (Force Management Policy). Darby’s activism continues to this day. (Please note: this information has not been updated since the time of the member’s induction).