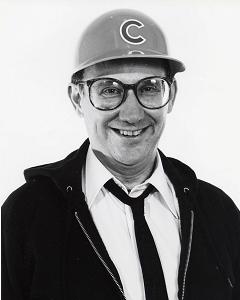 Jon Henri-Damski has been referred to as the “gay Studs Terkel.” Born in 1937, he died of melanoma complications in 1997.

He was a columnist for GayLife, GayLife, Gay Chicago Magazine, Windy City Times, and ultimately Nightlines and Outlines. Damski has penned over 700 articles chronicling gay and lesbian life in Chicago.

Damski kept his finger on the pulse of the community; he knew the powerful players, as well as the little people. From the playrooms of the Bijou to the antechambers of City Hall, his colorful neckties and his Cubs cap were familiar trademarks. Damski captured the sights, the sounds, the style, and the spirit of the gay and lesbian community.

He also taught adult education, with a focus on current events. A native of Seattle, Damski earned a Ph.D. at the University of Washington and later taught Latin and Roman history at Bryn Mawr College.

His lobbying efforts were important to the passage of the Chicago human rights ordinance in 1989 and the hate crimes ordinance in 1990. He died of cancer on November 1, 1997.