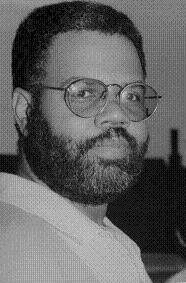 He was a veteran member of PrideChicago, which plans the annual pride parade. He helped to lead local and national gay and lesbian business organizations; the National Coalition of Black Lesbians and Gays; Kupona Network; and the Advisory Council on Gay and Lesbian Issues and its precursor committee. He died in 1996.

T. Chris Cothran was a constant figure in the leadership of the city’s organized gay and lesbian community, particularly as a Chicago resident from 1980 to 1992. His contributions to broader lesbian and gay community efforts have been many, and he has engaged in social activism specific to lesbian and gay African Americans as well.

As a typographer and graphic artist, Cothran is an openly gay businessman who has contributed to the lesbian and gay business community’s organizational development. In this role, he was treasurer of Chicago’s Metropolitan Business Association from 1985 to 1986, was a board member of the National Association of Business Councils from 1985 to 1987, and from 1986 to 1987 was the national group’s Midwest regional director. He is also a former production staffer of GayLife and the Windy City Times.

His history of political activism also included being a 1987 founding member of the Gay and Lesbian Caucus of the Independent Voters of Illinois-Independent Precinct Organization (IVI-IPO). From 1985 to 1992, he served on or chaired the Mayor’s Committee on Gay and Lesbian Issues (COGLI) and its successor, the Chicago Commission on Human Relations’ Advisory Council on Lesbian and Gay Issues (ACGLI). And in 1982-83 he chaired the Gay and Lesbian Coalition of Metropolitan Chicago, which held monthly meetings of organizational representatives and individual activists to share information and to plan projects.

Cothran’s social service involvement included terms from 1985 to 1988 as a founding board member of the Kupona Network and from 1985 to 1986 as a youth volunteer with Horizons Community Services. In 1990, he was a member of Team Chicago’s silver-medal bowling team at the Gay Games in Vancouver.

He was a veteran member of PRIDEChicago (the current name of Chicago’s Gay and Lesbian Pride Month planning committee). He first became involved with the group in 1983 and was a familiar presence on parade day, guiding marchers with his public address horn and two-way radio.