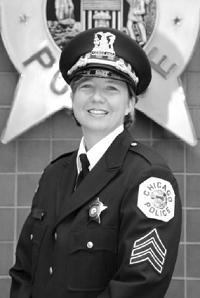 A native of Evergreen Park, Lori A. Cooper, joined the Chicago Police Department in 1992. After the academy, she was assigned to the 23rd District in the Lake View neighborhood, and by 1994 she was working as a beat officer in the North Halsted Street bar area. Cooper was always “out” as a lesbian police officer, and she quickly established herself as the go-to person when incidents involved the LGBT community. She worked with upper management at district and city levels to advocate for both LGBT issues and the Police Department. Most notably, she advocated for and won official support for the first open recruitment of lesbian and gay individuals by the 23rd District. She was soon appointed as a Police Ambassador on the city recruitment team to specifically bring LGBT candidates to work within the Police Department.

Officer Cooper recognized when hate crimes occurred and ensured that such cases were appropriately referred. She served at the inception of the Cook County State’s Attorney’s hate crimes advisory group and continues to serve today. Her focus on the needs of LGBT communities has led to significant policy changes within the Police Department. She has worked tirelessly to promote fair and unbiased reporting of incidents involving LGBT victims and to educate responding officers on the warning signs of domestic violence in same-sex households. She has advocated in courtrooms throughout Chicago for the upgrading of charges in cases where homophobic hatred was a motivating factor. Perhaps her most important Police Department contribution was the 1996 creation of the position of district LGBT liaison and of LGBT district advisory councils, which continue to serve vital functions for Chicagoans.

Cooper’s work with police officials—insisting on a police presence at “Dyke March” events even when there was no permit, for example—has been groundbreaking. She trained marshals, recruited off-duty police officers as volunteers, and effectively proved to the Police Department that the “Dyke March” was peaceful and deserving of protection.

In 1998, Cooper became the citywide LGBT police liaison and continued to advocate for equal treatment of LGBT individuals. Since then, she has been recognized nationally as an educator, focusing on the importance of positive relationships between LGBT residents and the police. She has also continued to investigate hate crimes for the State’s Attorney’s office, resulting in many successful prosecutions.

Cooper was promoted to sergeant in 2005. Since then, she has continued to serve as an advocate, educator, and friend of the community. She is the escort for the Police Superintendent in the annual Pride Parade and continues to maintain open dialogue between the Chicago Police Department and the city’s LGBT population. (Note: information listed has not been updated since the member’s induction).