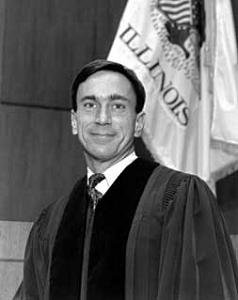 Tom Chiola is best known for being the first openly gay candidate to be elected to public office in Illinois, winning a Cook County Circuit Court judgeship in 1994. While serving on IMPACT’s board and as a state agency’s general counsel, he lobbied to pass state and county sexual orientation nondiscrimination laws. He was also an early leader in the gay sports movement and is a longtime AIDS volunteer.

Chiola’s judgeship race built partly on the efforts of other, earlier gay candidates, notably Ron Sable, and was augmented by success in attracting support from established Democratic Party organizations. With the help of lobbying by a coalition of opinion leaders, he ultimately secured the support of nearly every Democratic ward committeeman in his constituency—a local political milestone.

During his campaign, Chiola spoke eloquently not only to gay and lesbian groups in his 8th sub-circuit but also to neighborhood associations, organizations serving the elderly, and African American and Asian American gatherings. He built bridges to many communities while inspiring confidence and projecting a competent, positive image of gay and lesbian citizens.

Before running for judge, Chiola had played other significant parts in local politics. He was among activists who successfully campaigned for passage of the Cook County Human Rights Ordinance in 1993, and he made valuable lobbying contacts with several of Cook County’s governing commissioners from whom he gained support for the measure.

As a member of the IMPACT board of directors, and by using his state government contacts, Chiola and his supportive family also gave important testimony and other assistance in the still-ongoing campaign for adding “sexual orientation” to the Illinois Human Rights Act. He was then general counsel of the Illinois Department of Professional Regulation, and he helped persuade Governor Jim Edgar to attend an Equality Illinois (then called the Illinois Federation for Human Rights) cocktail reception on the eve of the bill’s vote in the state House of Representatives. The next day, the bill passed the House for the first time.

In 1993, speaking as a former National Honor Society high school leader, Chiola made news in his native Springfield by coming out publicly as gay during a speech at an awards banquet, where he urged high school seniors to “be all you can be” and not give in to unfavorable assumptions about their backgrounds or abilities. Chiola is now part of a group working within the judiciary to see that judges and other court personnel are sensitive to gay and lesbian litigants and their issues.

A Chicagoan since 1978, Chiola has also had a high profile in local gay sports circles. He was an early member and is a past director and softball league commissioner of the Metropolitan Sports Association. He helped to organize numerous pioneer gay sporting events and organizations and is an active runner, swimmer, bowler, and volleyball player. He helped develop pro bono legal services for persons with AIDS and has actively aided programs of the NAMES Project and of Open Hand Chicago, for which he volunteers every week as one of its food pantry workers. (Please note: this information has not been updated since the time of the member’s induction).