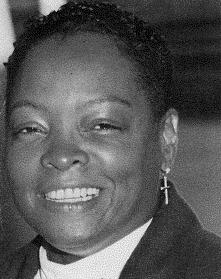 As an out lesbian and a longtime promoter and caterer for community events, Chef Tania Callaway hosted house parties that became legend in Chicago’s African American lesbian community and beyond. She often donated services and was chef at the Heartland Cafe for some 10 years.

Callaway, known to her friends and her public simply as Chef Tania was born in 1952, grew up in Chicago, and was an out lesbian from her teen years. In the late 1960s, soon after graduation from the culinary arts program at Washburne Trade School, she began to host house parties that became legendary in Chicago’s African American lesbian community and beyond.

She credited her mother and grandmother for “the best training I got” and recalled that her grandfather had been a railroad chef. Callaway was also a self-taught musician, which is said to have helped with expenses while she was in culinary school.

For some 10 years beginning in the 1980s, Callaway was chef at the Heartland Café in Chicago’s Rogers Park neighborhood. She was forced to resign by a lung disease; she eventually died from sarcoidosis in 2000. After leaving Heartland, she ran her own catering business for nine years.

Heartland owner Katie Hogan recalled that a highlight of Chef Tania’s career was when Hogan helped her to invite Carol Moseley Braun, who was then running for a U.S. Senate seat, to one of her parties. The future senator came, was introduced to the crowd, shook hands, and then spent 45 minutes talking with the chef, who was gratified that she had been able to bring party-goers into contact with the candidate. Callaway also attracted other political and entertainment celebrities for guest appearances at her parties.

Tracy Robinson, Callaway’s partner, recalled the chef as a generous person who had donated catering services top gay, lesbian, bisexual, and transgender groups. She attended the Church of the Open Door and sometimes prepared buffets there for its congregation.

Karen R. Phillips, an assistant and friend of Callaway’s, recalled here as a person so committed to her craft and to serving her public that she would produce parties when she should have been resting and would sometimes have to leave and event and go directly for medical care or bed rest.

During her lifetime, Chef Tania Callaway received a Bayard Rustin Award from the Greater Chicago Committee. After her death, the Windy City Black Pride organization named its Lesbian Community Activism award after her. She is remembered by thousands of people for her warmth and open heart and for the social cohesion that she fostered.