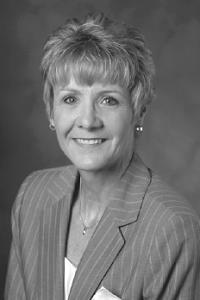 As a founding member of the American Airlines Rainbow TeAAm, Robbin Burr, helped generate a historic shift in the marketing campaigns of mainstream corporate America. Ahead of its time at its inception in 1996, the Rainbow TeAAm was the first marketing team from a Fortune 100 company dedicated to gaining the loyalty of LGBT consumers. As part of her 23-year career with American Airlines, Burr was the first woman to serve on Rainbow TeAAm. She co-chaired the airline’s employee affinity group and subsequently was elected to co-chair the corporation’s Diversity Advisory Council. Under her leadership, American became the first major airline to implement domestic partnership

As a result of Burr’s work and influence, many of Chicago’s LGBT nonprofit organizations have received unprecedented support from American Airlines, through savings on travel costs and through raising money from donated travel vouchers at auctions. Following American’s lead, other mainstream corporations have recognized the value of openly supporting LGBT causes. From 1996 to 2004, Burr was a familiar face at numerous LGBT fundraisers, actively raising money for a variety of organizations.

From June 2004 through June 2007, Burr served as Center on Halsted’s first executive director, leading the organization through the critical final years of its capital campaign. A decades-old institution was not only changing its name (from Horizons Community Services); it was also changing its entire mission and becoming one of the most comprehensive community centers in the United States. As Center on Halsted (COH) Board Chair Robert Kohl put it, “Robbin’s leadership was key to making Center on Halsted a reality. She led COH’s successful efforts to triple its donor base and to solidify important relationships with numerous donors, community leaders, and community organizations.”

Robbin Burr’s nationally recognized credibility and leadership were central to the successful establishment of Center on Halsted. During her tenure as executive director, the Center’s donor base tripled and the final $8 million of the $20 million needed was raised, enabling completion of the Center. At the same time, the organization nearly doubled its operating budget. Burr’s efforts facilitated realization of the long-awaited dream of bricks and mortar that now stands on the corner of Halsted Street and Waveland Avenue.

Nationally, Burr continues to have an impact upon the success of LGBT community centers, having been elected to co-chair The National Association of Lesbian, Gay, Bisexual, and Transgender Community Centers based in Washington, D.C. Because of her work with Center on Halsted, the name, reputation, and achievements of Robbin Burr will always be connected to Chicago. (Note: information listed has not been updated since the member’s induction).