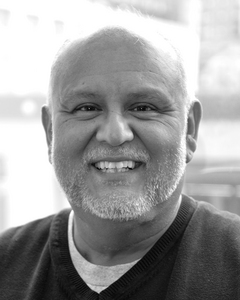 Román Buenrostro, was co-founder of the Association for Latin Men for Action (ALMA) and served people living with AIDS as a Director at the AIDS Foundation of Chicago, as the Director of Special Projects overseeing innovative programs that seek to link re-engage people living with HIV in care. Latin Men for Action (ALMA), was started in response to the lack of Chicago organizations for bisexual and gay Latinos. The group was the first openly sexual minority contingent of Latinx to march in the city’s downtown Mexican Independence Day Parade, the downtown Puerto Rican Day Parade, and Puerto Rican People’s Parade in Humboldt Park.

Buenrostro began his activist career as a volunteer for STOP AIDS Chicago in 1989 conducting “charlas,” or talks to educate the community about AIDS and help promote HIV prevention. Mr. Buenrostro served as an active volunteer at Horizons Community Services (now the Center on Halsted) for over a decade, beginning his ten years of service as a HelpLine counselor and eventually advancing to become a supervisor for other HelpLine counselors. In 2000, he was nationally recognized as the recipient of the Health Resources and Service Administration’s Part-A-Hank Carde Award for his efforts in service provision and community representation on the HIV Services Planning Council.

Román Buenrostro was re-appointed to the Chicago Area HIV Integrated Services Council (CAHISC) and in 2015 was elected as an openly HIV+ community co-chair in 2015. He worked actively to advocate for sound policy about HIV/AIDS, ensuring that services remain fair and equitable for all people living with HIV.