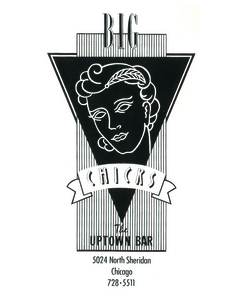 Big Chicks, an Uptown Chicago bar located at 5024 N. Sheridan Road, was opened on December 11, 1986, by Michelle Fire. In the thirty years that followed, Big Chicks provided a friendly, inclusive LGBT-focused watering hole and community safe space in an under-served area of Chicago. Both staff and patrons reflect the diversity of the Uptown neighborhood and the LGBT community.

Big Chicks has sponsored many LBGT sports teams, offered game nights, presented artistic performances, and hosted events including Faustos Ferno’s “Feast of Fun,” Scott Frees’ “Homolatte,” Sangat and Trikone events, Formerly Known As (FKA), a queer all-inclusive dance party, and much more. In addition, Big Chicks has a thirty-year tradition of serving a complimentary Sunday BBQ to all who come.

Having opened during the height of the AIDS pandemic, the bar was sensitive to the health crisis facing the community and responded accordingly. Big Chicks regularly distributed HIV educational information and materials and served as a place where health providers could reach out to the community. The bar has hosted countless events to support people living with HIV as well as numerous LGBT community organizations and political fundraisers.

Art patronage is another hallmark of Big Chicks. The walls of the bar and its sister restaurant, Tweet, are decorated with favorite works from Michelle Fire’s art collection, including many artists from the Chicago art scene as well as those with both national and international acclaim.

Big Chicks has been a strong anchor of the LGBT community through its hospitality, embracing of the community whether they are young or old, gay or lesbian, bi, trans, queer, questioning, non-binary or dressed in boy-wear or drag. In other words, Big Chicks has been and continues to be a place where all are welcome. (Note: information listed has not been updated since the bar’s induction).