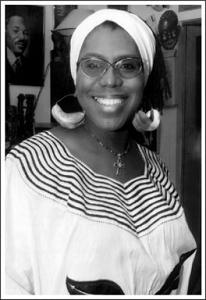 Lorrainne Sade Baskerville is an experienced HIV/AIDS case manager and a professional social worker. Baskerville founded transGenesis in 1995 as an agency aimed at addressing the special concerns of persons in the city’s transgender community, such as gender identity, substance abuse, HIV/AIDS, sex work, harm reduction, and self-empowerment.

TransGenesis aims to provide a safe environment for transgendered persons to pursue common social and personal goals. The organization supports awareness of and openness about gender identity and the way gender is expressed. It seeks to aid personal development and integrity in the transgender population. Its HIV/AIDS prevention program is called T-PASS (Trans-People Advocating Safer Sex) and includes street and community outreach, education, testing, and counseling. It also offers a weekly drop-in program for youth and young adults, called TransDiva, and a peer-led transgender support and discussion group.

Baskerville is a lifelong Chicagoan and was the eldest of seven children born into modest family circumstances. In the 1970s, she became familiar with sex workers’ conditions and sometimes was forced to confront a city ordinance of the times that prohibited her appearing in public while wearing female clothing. When AIDS struck a member of her family in the mid-1980s, Baskerville took its health threat seriously and entered a new phase of her life, as a volunteer at organizations such as Howard Brown Health Center and Horizons Community Services. She eventually decided to resume her education and in 1994 earned a bachelor’s degree in social work from Northeastern Illinois University.

In her community activism since 1986, Baskerville has served on the board of Test Positive Aware Network (TPAN), in the Chicago HIV Prevention Planning Group (HPPG), and in the Chicago Police Department’s 23d District Gay and Lesbian Advisory Group.

In 1997, Baskerville received the Greater Chicago Committee’s first Georgia Black Award for service to the transgender community. She chaired the Youth Events Committee for the Chicago Black Pride 2000 conference. She was selected by the AIDS Foundation of Chicago and the 13th International AIDS Conference to lead a panel on transgender issues at the conference in Durban, South Africa, last July. She is also an advocate for transgendered victims of hate crimes and violence. (Please note: this information has not been updated since the time of the member’s induction).