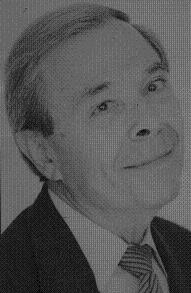 In addition to founding Mattachine Midwest in 1965, Robert Sloan Basker began Chicago’s first gay and lesbian telephone hotline, and started discussions with police amid arbitrary raids and arrests. He also took part in pre-Stonewall national activism and in Dade County organizing during the Anita Bryant era. Born in 1918, he remained a social-change activist in a variety of causes until his death in 2001.

By occupation an outstanding encyclopedia salesman, he liberally applied his persuasiveness, creativity and organizing skills on behalf of social change. At 75, his mind was amazingly open to the new ideas of others and fertile with those of his own. He persevered despite unpopularity, occasional poverty, and long-standing heart and other health problems.

Born September 30, 1918 in New York City, Basker was a resident of Chicago for 14 years, between 1952 and 1966. During the early 1960s, he organized Mattachine Midwest, the first modern Midwestern gay organization, encouraging pride and self-esteem in the LGBT community. This was the pioneering first in Chicago [other than Henry Gerber’s short lived 1920s’ group], paving the way for dozens of subsequent gay committees, clubs, and coalitions.

Basker also established the Mattachine Midwest telephone hotline for social service [e.g., legal, medical, psychological and pastoral counseling, and housing referrals] and other community needs of gays and lesbians. And, in what he called the famous “harvest of the fruits” case, centering on a police roundup at Clark and Diversey, Basker and Mattachine Midwest colleagues put a stop to arbitrary police mass swoops and arrests of people on the street who were perceived to be gay.

Though always far from rich, selflessly gave of himself for the sake of not only gay and lesbians people, but for the sake of oppressed groups in which he had no “stake” of his own. He traveled the length and width of Illinois in public forums, speaking on the matter of freedom of residence in behalf primarily of African-Americans, and he took a leading role in bringing racially integrated housing to Skokie.

Basker maintained contact with other lesbian and gay organizations around the country for mutual support and the exchange of ideas — including participation in the 1965 New York Conference of the East Coast Homophile Organizations, at which plans were made for convening the National [later North American] Conference of Homophile Organizations. Among his other affiliations during his Chicago residency were the Illinois Committee for Freedom of Residence, the North Suburban Urban League, the American Friends Service Committee-related HOME Inc., and the Illinois-Wisconsin Friends Committee on Legislation.

After leaving Chicago, Basker moved to Miami, Florida, where he helped to organize that city’s first Metropolitan Community Church, the Miami Gay Activist Alliance, and Gay Community Seniors of South Florida. In 1976, he convened 11 gay and lesbian groups to create the Dade County Coalition for the Humanistic Rights of Gays; he lobbied for and got passed an ordinance forbidding discrimination based on sexual orientation. Before his passing, he resided in San Francisco, and continued as an activist in gay organizations, as well as those involved in women’s rights, African-American issues, peace, and civil liberties.