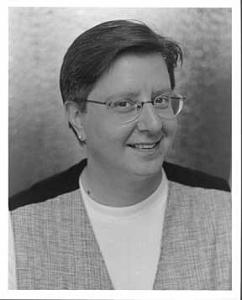 Carrie Barnett co-founded People Like Us Books with Brett Shingledecker, which at the time was Chicago’s only exclusively gay and lesbian bookstore and which helped to nurture the local literary community. She also headed the Gerber/Hart Library board and co-chaired large fund-raisers for community organizations.

As co-founder of People Like Us Books, which was the city’s only bookstore exclusively stocking gay and lesbian materials, Barnett helped to provide one of very few spaces in Chicago where lesbians and gay men routinely mingled. The store gave lesbian authors a rare chance to reach a gay male audience, and vice versa. In addition, it gave gay and lesbian authors an opportunity to organize joint readings, also an uncommon occurrence.

Through the store, Barnett was a leader in the gay and lesbian business and literary communities. She has served as a judge for the Lambda Literary Awards; the store gave many organizations their first fundraising support for raffles, door prizes, and volunteer recognition; and it functioned as an information center and ticket outlet.

Barnett helped see to it that gay and lesbian youth at Horizons Community Services had access to used books. She and her business partner sponsored appearances not only by well-known writers but also by those with sometimes lesser resources, including authors of color and self-published authors. The bookstore was a founding member of the Chicago Area Gay and Lesbian Chamber of Commerce.

Outside the shop, Barnett has served as a Horizons youth group adviser and on review panels for the Chicago Department of Public Health. She is a past president of the Gerber/Hart Library and Archives board of directors and has co-chaired fundraising events for such organizations as Equality Illinois and the Lambda Legal Defense and Education Fund. (Please note: this information has not been updated since the time of the member’s induction).