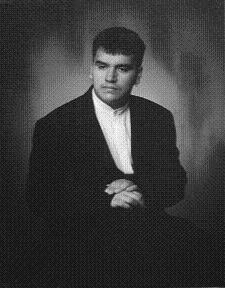 Miguel Ayala helped to start the first school-approved organization for lesbian, bisexual, and gay students in any Chicago public high school; helped form and lead a national alliance of such groups; and was the first openly gay honorary student member of the Chicago School Reform Board of Trustees.

A Chicago native, Ayala graduated in June 1997 from Whitney Young Magnet High School. In his first year there, he helped to persuade the school to start a new Asian and Latino literature class. In his second year, he ran successfully for the Local School Council.

He was also involved with the Somos Latino Coalition, Aspira Inc., AIDS Awareness, the school yearbook, the student council, and the senior committee. He took male dates to school dances despite opposition, and he faced administrative meetings alone (supported only by a tape recorder).

In late summer of 1996, Ayala helped to organize Student Pride USA, a national alliance of lesbian, gay, and bisexual high school student clubs. He was the organization’s president and primary spokesperson until the summer of 1997, when it became a project of the national Gay, Lesbian, and Straight Education Network (GLSEN). Ayala set up a website for the group and helped to secure its Internal Revenue Service recognition as a 501(c)(3) organization. He also led a consciousness-raising campaign about homophobia in the Chicago Public Schools.

In October 1996, he went to Washington, D.C., to participate in a gay youth festival and in La Marcha, a march for Mexican American rights. In 1996 and 1997, he took part in Chicago’s Gay and Lesbian Pride Parade in contingents of teenage school-based LGBT activists.

Since 1996, Ayala has given interviews in mainstream and gay publications, radio programs, and television shows. He has spoken in a variety of venues, including national and regional educators’ and researchers’ conferences, and at universities.

In 1997, Ayala was elected to the Chicago School Reform Board of Trustees as the first openly gay and actively Hispanic honorary student member. He is working to get the board to address issues of concern to lesbian, gay, and bisexual students.

At GLSTN’s national conference in Salt Lake City, he received the group’s 1997 National Pathfinder Award for outstanding contributions to school-based activism. He received GLSTN Chicago’s 1997 Youth Scholarship Award of $1,000 for his contributions to ending homophobia in Illinois schools. Ayala also received a Human Rights Campaign award in 1997 for activism and was named by the Advocate magazine in 1997 as one of the nation’s “Best and Brightest Under 30.” (Please note: this information has not been updated since the time of the member’s induction).