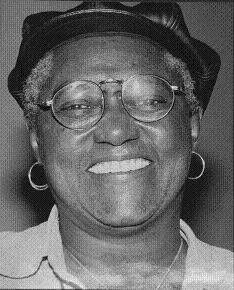 As educator and writer, Jacqueline Anderson has contributed to academic discussion about lesbianism and feminism. She helped to establish a Lebsian Community Cancer Project clinic on Chicago’s South Side; led Yahimba, which held citywide conferences on African American lesbians’ needs; and supported the Institute of Lesbian Studies, the Mountain Moving Coffeehouse, and Gerber/Hart Library.

Anderson was an educator and, beginning February 1975, an assistant professor of humanities and philosophy at Olive-Harvey College, one of the City Colleges of Chicago, where she twice served as department chairperson. Through her publications, she contributed to academic discussion about lesbianism and feminism, publishing in such journals as Signs: Journal of Women in Culture and Society. She jointly coordinated the Olive-Harvey College Women’s Center since 1990 and was highly involved in the college’s Faculty Council.

Anderson was also a steadfast volunteer in the gay and lesbian community. Her leadership of the Yahimba organization has resulted in at least two citywide conferences specifically addressing needs of African American lesbians. She was a supporter of the Institute of Lesbian Studies, the Mountain Moving Coffee House, and Gerber/Hart Library.

Anderson was described by other activists as one of their role models and is credited with helping to pave the way for many gay and lesbian individuals to heightened self-esteem and community empowerment. Anderson died after a short illness on Jan. 7, 2016, surrounded by family and friends. She was 75.