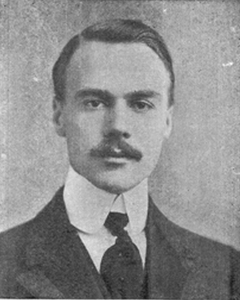 Robert Allerton (1873-1964) | Honorary president and trustee of the Art Institute, this gay Chicago philanthropist’s donations beautified the city. Once dubbed “The Richest Man in Chicago,” Robert Henry Allerton was the son of the founder of the First National Bank of Chicago. Yet despite being born into luxury, Allerton rejected the typical trajectory of the elite — from posh schools to tycoon career. Instead, after prep school, Allerton spent five years studying art in Europe and in 1897 bought a farm near Urbana, Illinois, transforming it into a baronial estate called “The Farms” featuring ornate gardens, neoclassical statues, and Asian art.

As he grew older, Allerton worried about his estate. He could merely amend his will and leave everything to his younger lover, John Gregg, but relatives would protest and legal battles would ensue. In 1951 Allerton pressured the state legislature to permit adult adoptions. He spearheaded this effort as a way to adopt his adult partner so his inheritance could not be legally challenged. In 1951 at age 77, Allerton adopted 52- year-old Gregg, making his longtime companion his son.

The two men endowed The Robert Allerton Park (donated to the University of Illinois), the Allerton Gardens in Hawaii (now part of the National Tropical Botanical Garden), the Honolulu Academy of Art, and notably for Chicago, the main building of the Art Institute where Allerton served as the honorary president and trustee. The building was renamed in his honor in 1968. In addition, Allerton gifted over 6,600 pieces to the Art Institute, including six Rodin sculptures and its first Picasso, and making him one of the most dedicated patron-benefactors in the Institute’s history.

When Allerton died at age 91, his entire estate went to his partner and adopted son, John Gregg, without issue, thus providing a loophole to the first legally recognized same-sex relationships.