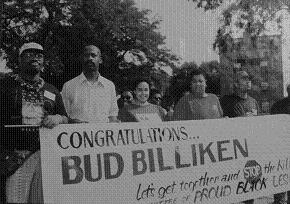 The Ad Hoc Committee applied to enter the event well before the deadline, but its application was denied allegedly based on “space, time, and manpower constraints” according to the Defender Charities. But a virtually identical application submitted under the name “Diverse Black Role Models” one month later — and two days before the filing deadline — was granted immediately. The only difference in the applications was the mention of gays and lesbians in the first, denied application.

Because the Ad Hoc Committee’s application was denied a second time in mid-July, it filed a complaint with the Chicago Commission on Human Relations alleging unlawful sexual orientation discrimination in the provision of public accommodations. The Ad Hoc Committee was represented in this action by the Lambda Legal Defense and Education Fund. In two days of mediated negotiations, the Ad Hoc Committee and Lambda convinced the Defender Charities to allow the group into the parade under the banner of Proud Black Lesbians and Gays, settling the dispute out of court.

The Ad Hoc Committee marched near the front of the parade and celebrated themes of visibility, youth education and anti-violence, consistent with its mission to promote positive images of Black lesbians and gay men in the community, to increase visibility, and to respect and celebrate diversity in all its forms.