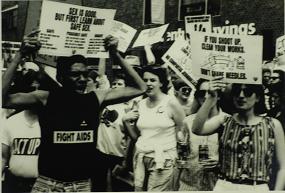 ACT UP/Chicago was the local chapter of the AIDS Coalition To Unleash Power, a national organization committed to using direct action and civil disobedience to fight AIDS. It challenged both institutional responses to AIDS and homophobic discrimination.

The earliest responses to the epidemic were silence, fear, homophobia, neglect, and measures that penalized rather than assisted people with AIDS (PWAs). ACT UP advocated for PWAs through large demonstrations, creative zaps, agitprop campaigns, and meetings with medical professionals and government officials. ACT UP had a profound effect on the lives of lesbian, gay, bisexual, and transgendered persons, challenging institutional responses to AIDS as well as homophobic discrimination.

The Chicago chapter’s roots went back to 1987, when DAGMAR (Dykes and Gay Men Against Racism and Repression) protested then-Governor Thompson’s perceived support for repressive AIDS laws. In 1988, DAGMAR and CFOR (Chicago for Our Rights) formed C-FAR (Chicago for AIDS Rights), which evolved into ACT UP/Chicago, a group comprising PWAs along with gay, lesbian, bisexual, and non-gay persons, of color and white, who united for the rights of PWAs.

ACT UP/Chicago’s most renowned action was a demonstration by over 1,500 AIDS activists from across the nation that targeted public and private health-care systems. It also highlighted insurance discrimination and a call for national health care. A key demand was that Cook County Hospital open its AIDS ward to women. The ward began admitting women the very next day. All of ACT UP’s direct actions were supplemented by highly visible agitprop that educated and entertained.

This induction is posthumous. ACT UP/Chicago died as an organization in 1995. By then, many participants and supporters had died; others had become service providers; still others were exhausted and disillusioned.